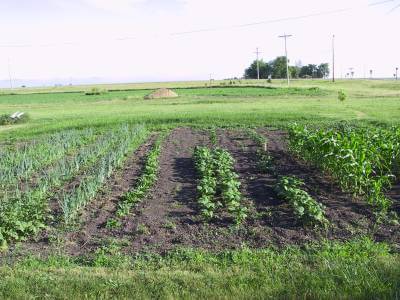 A simple garden this year due to time constraints.

Finally started planting the DDC garden. It has been very wet, so early vegetables such as potatoes which are normally planted on Good Friday, are being delayed. I planted radish seeds (Champion heirloom) a few days ago. The garden layout is under Pages section of the blog. In the greenhouse, there are jalapenos, red peppers, and spinach seeds growing.

It has been unbelievably wet. No rain for 3 days and the ground is still unworkable. It rained 20 of 30 days in April.

I planted spinach and oregano yesterday (May 3) and zucchini today in our 2nd garden. An old 14×13 six inch thick cement pad is being chopped up with a sledgehammer. Slow, strenuous, sore work but in its place will be an expansion of our garden in our back yard.

Another row of radishes were planted since the first row will be harvested within the week. The potatoes were side-dressed with 12-12-12 fertilizer. Yeah for the strawberries as they are showing many blooms. The spinach is near harvesting for baby spinach – next weekend. We have had below normal temperatures for the past several weeks. Onions are a foot high and looking good!

The field corn around us is several inches high already.

I decided to plant carrots, lots of them. Last year they grew pretty well. Fortunately it was not windy. The carrot seeds are so small it is hard to plant one at a time. I tap them out of the package.

Also, the onions were finished planting. I hope to get pictures up soon. The potatoes are doing well. The corn is poking its head through along with the zucchini and cucumbers.

I’m just about finished planting. Today the tomatoes, peppers, and most of the onions went into the ground. Radishes and spinach are showing. A nice 3/4 inch rain yesterday made planting easy but muddy. The strawberries have several blooms on them and are doing nice.

We have planted most items except tomatoes, peppers, and pumpkins. The assumption of the last no frost day is May 15th. A few years ago we tried planting on May 1st and there was a nasty frost on May 3rd. Quite unexpected.

I decided against carrots this year.

The potatoes are poking their heads through, finally. The asparagus was side-dressed with 12-12-12 fertilizer. Strawberries are growing pretty good but no flowers, yet. They get prepared at the end of harvest, around July, for next year’s crop.

We planted 4 rows, north and south, of Kennebec, Red Pontiac, and Yukon Gold (my favorite) potatoes.
Detailed information on planting potatoes in the midwest is available.

This will fill out as we plant more veggies.

I thought that I would never have anything to do with asparagus: stringy, woody, smelly vegetable.

How times have changed.

Last year DDC planted several Mary Washington 2 year asparagus plants on the south side of the garden (along with strawberries). They were not covered for the winter, which has been a nasty one. Hopefully they have survived. Next year should be the first crop of asparagus.

In the mean time, here is a simple, yet tasty, asparagus recipe to indulge in.

Just a quick note that we have our first batch of corn a few days ago. Though the corn stalks were shorter than usual and in varying heights the corn tasted pretty good. A downpour of 3 1/2 inches of rain, most in a 2 hour span, bent many of the corn stalks. Since corn has a shallow root system this did not surprise me.

BTW, I cooked it the old fashioned way: by boiling. Get the water to a rapid boil, toss the cleaned corn into the water, when it starts boiling again it will be done in 4 1/2 minutes.