Cilantro needs its own space in the garden where you can harvest it and then let it go to seed. It grows fast in the cool weather of spring and fall, creating a rosette of lacy leaves. When the weather gets warm, the plant sends up a long, lanky flower stalk bearing flat umbels of white or pinkish blossoms which later produce coriander seeds. Plant cilantro in a bed devoted to herbs where it can reseed, or in a corner of the vegetable garden.

It is best to dedicate a patch of garden to cilantro since it self-sows. Seeds germinate in about 7 to 10 days.

Cilantro is best grown by directly sowing seed in the garden for two reasons. It grows so quickly it needs no head start indoors, and since cilantro develops a taproot, it doesn’t like being transplanted.

Grow cilantro in full sun and well-drained soil with a pH of 6.2 to 6.8; it will tolerate light shade in the South and Southwest where the sun is intense. In the South and Southwest, plant 12 to 18 inches apart in the fall or the spring about a month before the last frost. Fall is the ideal time to plant in zones 8, 9, and 10 because the plants will last through until the weather heats up in late spring. When plants begin to bloom, the foliage becomes scarce; for steady harvest, set out plants every 3 to 4 weeks until the weather gets warm in spring, or until the first frost of fall.

North of the border
Cilantro is productive for only about 6 weeks in cooler climes, so here are some tips on dealing with cilantro’s persnickety nature.
• Dedicate a small patch of garden to cilantro.
• Direct sow plants every 2 to 3 weeks, starting about 2 weeks before the last frost date (around May 15).
• Once the plants bolt, allow them to go to seed. (Cilantro bolts when temperatures climb above 75°F for a few consecutive days.)
• Retain the patch so self-sown plants will come up in the spring.

Application of compost around the base of the plant adds nutrients, helps retain water, and keeps the roots cool.

Cilantro frequently self sows. As seeds fall to the ground, little plants often come up during the season and the following spring.

Prepare soil by adding some compost or other organic matter to the planting area and working it into the soil to a depth of at least 18 inches. Rake the area smooth. Sow cilantro seeds 1/4-inch deep directly in the garden in late spring or early summer. Sow seeds or thin to 6 to 8 inches apart in rows spaced about 1 foot apart. Provide plenty of moisture and feed cilantro plants with a water-soluble fertilizer when they reach about 2 inches in height.

Since cilantro grows so quickly, it can also be sown again in the fall in warmer zones. For a steady supply of fresh leaves all summer, make successive sowings of cilantro seed every 2 to 3 weeks beginning in the spring. 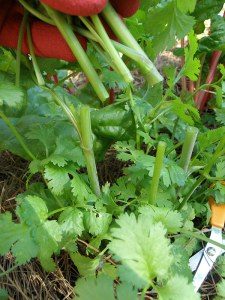 For Coriander
The large coriander seeds are easy to harvest and handle. Harvest on a dry day. Cut the top of the stems when the seedpods begin to turn brown and crack if pressed. Make sure pods are harvested before they release seeds into the garden. Once stems are cut, place seedpods in a paper bag so seeds will be caught. Finish the ripening process for a few weeks in a dark, well-ventilated, cool place. Pods can be shaken or rolled around in your hands to release the seeds. Harvest the seeds by clipping the brown, round seed heads; place upside down in a paper bag. In a few days, the round husks will dry and split in two, dropping the edible seed inside. Don’t delay seed harvest, or the weak stems will fall over.

If you’re growing the plant for seed, don’t bother fertilizing since that may delay flowering and thus seed production. 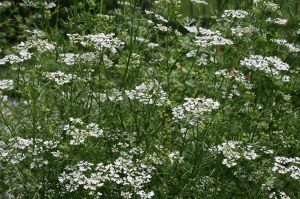 Cilantro will grow tall and wispy as it starts to bloom. The white flowers later produce the seeds we all know as coriander.

Cilantro occasionally has problems with aphids and whitefly, wilt, or mildew. For the insects, use insecticidal soap. To prevent or control wilt and mildew, make sure you clean up spent cilantro plants at the end of the season, and remove any infected plants as soon as possible.

One of the surprises that most gardeners get from cilantro is that it moves through its life cycle so quickly, especially in spring. If you are lucky enough to live in a mild winter climate, fall and winter give you the longest season to harvest. Once you understand this fast little plant, it’s easy to manage. Give it its own patch in the garden where you can harvest, then ignore, then harvest again. Harvest while it’s low, let it get tall when it wants to, then cut off the tall plants after the seeds drop to get it out of the way. This makes room for the new plants that start themselves from the fallen seeds. Or, of course, you can set out new plants every 3 to 4 weeks for as long as we have them in the stores, but the harvest and ignore technique will get you through the in-between times.

You can harvest cilantro’s foliage continually in the cooler months of spring and fall and through winter in areas without hard freezes. Harvest by cutting the leafy stems near ground level; most will be around 6 to 12 inches long. Avoid cutting more than one-third of the leaves at one time, or you may weaken the plant. Fertilize with Herb & Vegetable Plant Food or fish emulsion after 4 or 5 harvests.

it will start to yellow if it is not fertilized regularly. Keeping it fertilized means more leaves for us to harvest….more salsa at my house. Cilantro leaves may also fade from that dark green color when it is grown in soggy soils.

Growing cilantro adds a lot of healthy, fresh flavor to your kitchen. Freshly chopped cilantro is an excellent source of potassium, is low in calories, and is good for the digestive system. It is best to use fresh cilantro in cooking since it loses its flavor when dried. Add chopped leaves at the last minute for maximum flavor. Cilantro blends well with mint, cumin, chives, garlic, and marjoram. Store by freezing the leaves in cubes of water or oil; you can dry them, too, but they lose a lot of their flavor this way, which explains why growing your own is far better than buying it from the spice rack.

Store coriander seeds in a cool cabinet or the refrigerator. Use them in curry, poultry, relishes, and pickles.

My cilantro is tall and lanky with few leaves.

It sounds like your cilantro has started to bloom. Once the weather begins to get warm in late spring or early summer, cilantro will transition from a round, leafy plant with parsley-like foliage into a taller, lacy-leaved plant with white flowers in clusters at the top. In a few weeks, you’ll see round seeds forming. When harvested, these can be ground into coriander. If you leave them to mature, plants will fall to the ground and sprout again in the fall or early spring. While your plant will die after flowering, its offspring will take over, giving you a seasonal supply of flavorful foliage. Without adequate lighting though, expect the cilantro to grow ‘leggy’ or spindly.

Cilantro is a biennial, which means it grows leaves the first season, and then it flowers and dies the second. Set out plants in early fall for optimum growth. They will develop into round, leafy plants that look a lot like flat-leaved parsley, but the flavor is distinctly different. If the winter is mild, you’ll have cilantro for months. Then in spring you will notice the plant growing taller and the leaves changing to a very lacy form. There will be white flowers on top, and after the seeds ripen, the plant will die. Seeds that fall to the ground in summer will germinate in fall, so the cycle begins again.To have a supply of cilantro in summer, you’ll need to preserve it. Drying is not the best for cilantro. Instead, chop or puree the fresh leaves with olive oil. Store this in a heavy plastic container or freezer bag in the freezer for later use.