Growing potatoes (Solanum tuberosum) have been easy to do in the DDC garden. My favorite is Yukon Gold which I have a lot planted this year (2007). Others we have grown successfully in the past are Red Pontiac and the white Kennebec.

Do not grow potatoes in the same location until 3 years have passed. Disease and bugs persist and need this long to die off.

Potatoes are a cool season vegetable. They grow best in soil that is between 60 and 70 degrees. They will not form when the soil is 80 degrees or higher.

There are literally over a hundred varieties of potatoes in a multitude of colors. As mentioned before we have had very good luck with Yukon Gold, Kennebec, and Red Pontiac. Another variety I have seen at the stores is Viking which is a red skinned potato.

Potatoes are among the first crops planted in the spring. I usually plant them the mid April or when the soil is workable. Planting too early may result in rot if the ground stays wet. Cut the seed potatoes in quarters and make sure there is at least one eye in the quarter. Once cut let them sit for a day or two so a crust develops over the cut part. This reduces the chance of rotting. The eye(s) will become the stem so it needs to be planted facing up. There should only be one or two eyes on the cut potato. Full sun is the best for potatoes. Potatoes mature 90 to 120 days after planting, depending on the variety.

I have always used seed potatoes rather than ones left over from the year before (though many farmers practice this). The seed potato is cut up in pieces where each piece has at least one “eye”. Each piece is planted about 12 inches apart in a trench about 3 inches deep. I use a hand plow to dig the trench. Each row is 2 feet apart. Placing straw about 4 inches thick or mulch in between the rows help keep moisture in and lower the ground temperature by 10 degrees.

Yukon Gold have low drought tolerance so keep an eye on them. The soil should be well-drained and fertile. Compacted soil or clay soil will produce misshapen tubers. Keep the potatoes evenly watered so they do not get knobs (secondary growth). Water early in the day and try not to water the foliage. 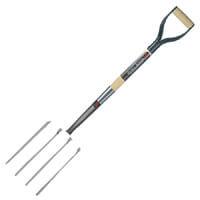 Most potatoes can be stored in a cool (40 to 50 degrees), dark place (not the refrigerator since the starches will be converted to sugars and give the potato an oddly sweet taste.) for several weeks. Yukon Gold do not store as well as others. If parts of the potato turn green just remove the green part and eat away. Potatoes do not freeze or can well. Do not wash potatoes until they are ready to use. Washing them shortens their storage span.

Here are some excellent ways of serving potatoes. They go over big every time. Garlic Red Potatoes and Herb-Roasted Potatoes